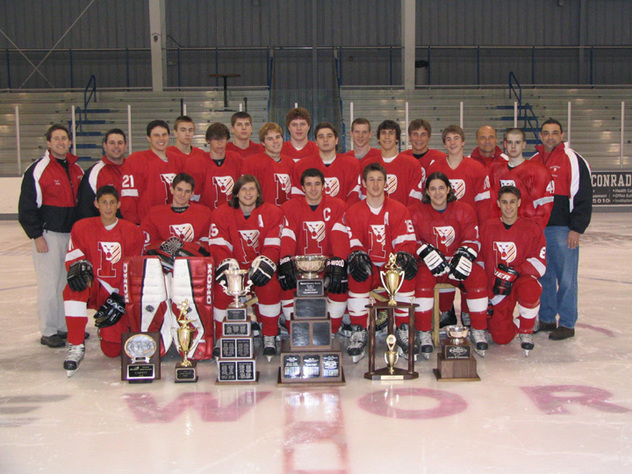 The 2004-05 Lions with the Hardware
The 2004-05 Penncrest Lions Varsity capped an amazing season on March 26, 2005 by winning the Pennsylvania State Class A title in a thrilling game over the Bishop McCort Crimson Crush. The Crush out of Johnstown had won 5 previous state championships and was looking for a sixth. They jumped out to a 2-0 lead after 7 minutes and looked to be on their way. But, like so many other times this season the Lions battled back. Dave Bixler converted
a rebound of a Rob Rottensteiner shot at 10:28 of the first to pull the Lions within a goal. Bixler struck again with :11 seconds left off a feed from
Nick Kusturiss and Tim Paulson. The Lions opened the scoring in the second period as Kusturiss ripped a laser over the glove hand of the McCort goalie 4:17 in and staked the team to its first lead of the contest. The Crush answered back just 3:20 later off the rebound of a tremendous save by goalie Ryan
McElhenney. Not to be outdone, Brad Ryan scored probably the biggest goal in Penncrest Ice Hockey history with just :12 seconds left in the
second. The teams skated off after two periods with the Lions clinging to a 4-3 lead. In the third period, the Lions showed why they dominated the
Central Division and the Flyers Cup as they turned up the forechecking pressure on the boys from Johnstown. The game stayed 4-3 until Kevin Vanaman
intercepted a pass just outside the McCort blue line and backhanded it into the empty net to seal the victory and the first state championship in history for
any Penncrest athletic team.

Looking back on the season, and recapping the year tells how this team was able to accomplish so much. After losing the first two non-league games
of the season to AA Downingtown West and AA Downingtown East, the Lions then went 13 straight games without a loss before falling to AA Pennsbury with several JV players in the lineup. The boys then reeled off ten more without a loss, including a 5 - 0 - 1 record in the AA Christmas Tournament at Ice
Line. In winning the AA bracket they avenged the earlier loss to Pennsbury by crushing them 4-0 in the tournament semi-final. A 4-2 win over Salesianum in the championship added the first piece of hardware for the 2004-05 squad. After the tournament, the team faced perennial AAA power Malvern in a league game. The boys battled hard, but came up short in what would be the only league loss suffered by the team. This was also the last time the Lions would lose that season. They finished the season 13 - 1 - 4 in the division, easily good enough for first place. In the playoffs the team defeated Lower Merion 2-0, Garnet Valley 2-1 and Garnet Valley again 5-0 proving that they truly were tops in the Central. Next came the Flyers Cup and the burden/blessing of being the #1 seed. Wins over Clearview 7-2, Kennett 3-1, Lower Dauphin 4-0 put the Lions in the Championship game against the #2 seed CB West. Penncrest scored first only :18 seconds into the game as Fran Naselli poked in a Brad Ryan pass for the 1-0 lead. CB West stormed back on couple fortunate bounces and put the boys in a 2-1 hole. This was short-lived however as Ryan scored a power play goal to tie the game. From that point on it was all Lions as they erupted for 4 unanswered goals to claim the 6-2 win and a trip to Hershey.