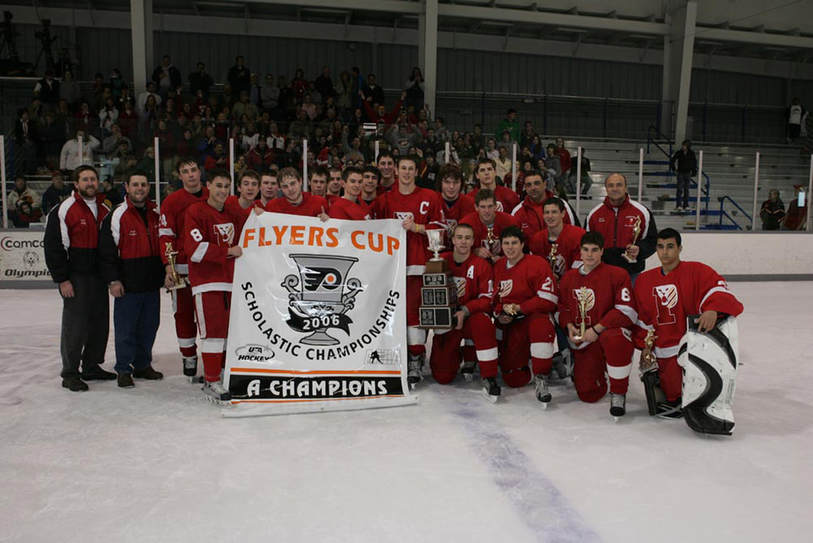 The Lions entered the 2005-06 season determined to prove the 2005 State Championship wasn't a fluke.  Injuries and bad luck plagued the team as they compiled a 9-6-3 record in league play finishing behind Springfield in the Central Division.  Experience can be a great asset, and the Lions proved this by winning their first two playoff games to make it to the Central League Championship game vs. their archrivals from Springfield.  Penncrest struck first on a power play goal by Mike Maser midway through the second period.  The Cougars countered halfway through the third on a power play goal by Matt Green.  The teams ended regulation tied at 1-1.  In a battle typical of the Lions-Cougars clashes of the day, the first two overtimes passed with neither team able to end it.  Late in the third overtime, the Cougars captured the Central League title on a goal by Phil Eastman.  A valiant fight, and a tough loss, but it only served to make the Lions more determined entering Flyers Cup play.
Penncrest was the only team from Eastern Pennsylvania to win a state championship in 04-05. Many of the players from 2005 returned this season, and that big-game experience was a major factor in the Lions' run to the 2006 Flyers Cup A championship. Third-seeded Penncrest defeated Kennett and Plymouth-Whitemarsh in early-round games before upsetting second seeded Hershey, 4-2, in the semifinals.
While Hershey proved to be a formidable opponent, an even bigger obstacle awaited Penncrest in the A Final, in the form of top-seeded Springfield (Delco). Springfield had the Lions' number all season, as Penncrest went winless (0-2-1) against its Central League rival during the regular season. Penncrest used the underdog mentality to its advantage, and shut down the offensive tandem of Von Mondevergine and Phil Eastman throughout the final game. Chris Tull's second period goal was the game's lone tally, and goalie Ryan McElhenney stopped 25 shots to earn the shutout. For his efforts, McElhenney was awarded the Flyers Cup A MVP Award. He led the Flyers Cup in nearly every goaltending category, including save percentage (.936), saves (73) and goals-against average (1.19).
2005-06 Team Statistics
Powered by